“Art enables us to find ourselves and lose ourselves at the same time.” -Thomas Merton

Every student, employee, and visitor of West Virginia University has seen the vibrant and imaginative mural painted at the downtown PRT station, and although its immense beauty brings color and joy to an otherwise bleak, grey wall, it also raises some questions: Who? Why? How?

Geraldo Valera and Cecily Flight joined forces in 2013 on a mission: to beautify the campus. The more they talked and planned, the more people listened. People rallied behind them, and they created the WVU Art Movement. There have been quite a few art installations around Morgantown as of late. In January of 2015, German brothers and world-renowned graffiti artists How and Nosm created their “Present Moment” mural installation, the Art Museum of WVU opened its doors in August of 2015, and the downtown mural was completed this past fall semester as well.

“It became kind of a movement,” Valera expressed.

They began their long descent into the meshed world of art and bureaucracy in 2013. Paperwork and approval for the mural took almost a year to complete. The PRT station maintenance team had been working on repairs which caused a delay, and the duo had to deal with trademark and licensing deals since they wanted to use “WVU” and the WVU Mountaineer in their artwork.

After many, many meetings, the project was approved. With the help of WVU’s SGA Arts and Entertainment director Jonathan Riseberg, Valera and Flight were able to make more contacts in SGA as well as the Greek system on campus. However, one problem remained: there was no funding. Money from WVU did eventually arrive, but it arrived late. They began painting using donations they had received and with the help of volunteer workers, and they finished faster than the University was able to help fund. So many students wanted to help that Valera said he actually had to turn away about ten students because there were already so many.

Three separate drafts were presented to the board at WVU before the final design was prepared. WVU President E. Gordon Gee liked all of them, according to Valera, but the decision wasn’t up to Gee alone.

“There are a lot of people that come into play with how they want the University represented,” Valera said.

The initial draft exhibited literal representations of environmental issues in the state, but the University felt it was too political. They wanted something more abstract and less deliberate. Alas, the mural came to life.

Abstract as it may be, there are a few symbols we are all able to recognize. The waves represent water as a whole, but also more specifically the Monongahela River which flows right through downtown Morgantown alongside the campus. 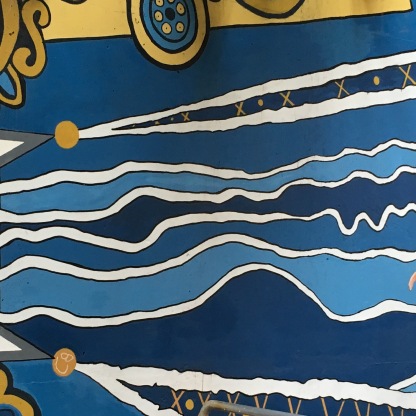 “Water is born from the mountains of West Virginia. It exports through the river,” Valera explained. “Lots of people underestimate that.”

The design in the center, a star, was created using the Fibonacci sequence of Art. Fibonacci is a sacred geometrical mathematical pattern, one that Da Vinci himself used to use. According to Valera, everything in nature has this pattern.

Also among the recognizable symbolism is a woman holding a torch. This is commonly an icon of freedom and liberty. The torch alone is a well-known symbol for liberty, and the fire for hair on the woman represents freedom of expression in a non-academic sense, Valera detailed. The bird on the left is also a symbol of freedom.

After all, montani semper liberi, Mountaineers are always free. 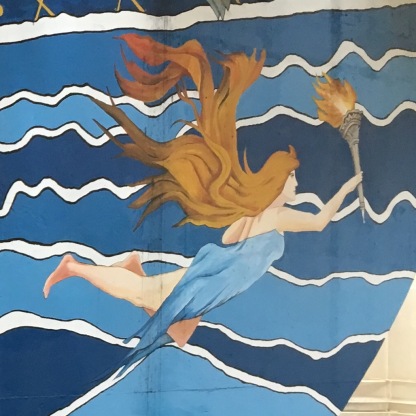 The mural took about a month to complete between classes, jobs, and other obligations by the artists. The project has received a lot of positive feedback, and the University has taken notice of that, said Valera. They will begin work on a second mural, the other side of the PRT station walkway, in the summer. It has already been approved, and the draft includes a portrait of the WVU Mountaineer. Given the great deal of support and adoration the first mural received, the process was much quicker and easier to get the second design approved.

The University has asked that the artists put a plaque beside the mural explaining the meaning behind it and the artists involved, and Valera says they will probably do that after the second installation has been completed to make it sort of an art exhibit as students walk through.

The mural is the first student-painted mural on campus, however there are two other murals on campus that were professionally painted, one being the attention-grabbing, two story German installation in the Art Museum of WVU – which incredulously took the brothers only a mere three days, I might add.

The second, created in 1940 by Pittsburgh Industrial artist Robert Lepper, even made an appearance in the 2004 film Spider-Man 2. The mural, created as a part of the Works Progress Administration – a program created by President F.D.R. – is in White Hall on WVU’s downtown main campus. It was this mural which inspired Valera to add more art and color around the campus.

I feel I speak on behalf of all WVU students and faculty when I say thank you, thank you to all the artists who are working to make our home in the mountains even more beautiful.

“I think the best thing is to inspire people.” – Gerardo Valera

9 thoughts on “WVU’s Mural in the Mountains”